The Repeal of ’Don’t Ask, Don’t Tell’: An American Imperative 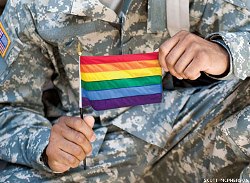 As featured in Edge Magazine a publication dedicated to the presentation of local and national news & information for the GLBT community.
Sept. 20th solidified the historic repeal of ’don’t ask, don’t tell,’ which was passed by Congress and signed by President Barack Obama late last year. The president, Defense Secretary Leon Panetta and Chairman of the Joint Chiefs of Staff Mike Mullen issued certification to Congress on July 22 that the military is ready for repeal.
The controversial ban has been in effect for 17 years, and is a measure banning gay and lesbian Americans from serving openly in the military. While it is a big win for LGBT equality, in actuality it just “gives-back” a fundamental right guaranteed to all citizens that was taken away-freedom of expression and identity.
The repeal of DADT has faced and will continue to face political opposition until the pass is finalized-and even then, probably for years after. The policy was introduced as a compromise measure in 1993 by then-President Bill Clinton who campaigned on the promise to allow all citizens to serve in the military regardless of sexual orientation. After becoming an official federal standard it inevitably created a kind of modern segregation-unprogressive and constraining. It goes against American ideals of freedom of expression. Gender identity and expression was now seen as “a military distraction.” To many conservatives, creating an openness about sexuality was dangerous, while to repeal supporters it is an American imperative.
The repeal comes as two of the most powerful Republicans on the House Armed Service Committee call for a delay on the process of ending DADT. On Sept. 15, five days prior to the effective date of the repeal, Congressmen Buck McKeon (R-Calif.) and Joe Wilson (R-S.C.), wrote Panetta asking him to “take immediate action to delay the implementation of repeal.” McKeon and Wilson state that the request is due to their belief that Congress was inadequately informed of the policy changes that will accompany the repeal.
The Pentagon’s response refutes Wilson and McKeon.
“[S]enior Department of Defense officials have advised Congress of changes to regulations and policies associated with the repeal,” it said in a statement. “We take that obligation seriously. Senior department officials, including the general counsel, have met with House Armed Services Committee staff and shared with them all of the proposed revisions to the regulations and new policies to be promulgated.”
Troops underwent training programs to clarify the law and ensure a smooth transition to its repeal. Moreover, before the law could go into effect, defense leaders had to certify that it will have no adverse impact on the military. Military leaders say they have seen no widespread resistance to the policy change. In a survey of troops last year, two-thirds predicted little impact on the force’s ability to fight. The greatest complaints about the change came from combat troops, including many in the Marine Corps and Army. Most of the training was expected to be completed by this summer, but there is no requirement that 100 percent of the military be trained prior to repeal.
Previous Defense Secretary Robert Gates, a steadfast supporter of repealing DADT, maintained there would be no roadblocks to ending the ban. Prior to leaving office, Gates issued an order that no one could be discharged under DADT unless it was approved by the secretary of the military service involved. The Pentagon raised the bar for separation of LGBT troops by requiring the civilian service secretaries and the Pentagon’s top lawyer to approve any separation. Since then, only four troops have been separated pursuant to DADT.
Unfortunately, the conditions of the four separations are somewhat disturbing. Three members of the Air Force proactively requested to be discharged because they are gay, moving quickly to get out of the military under the ban on openly gay service before its repeal. According to the Air Force, this past June, two female staff sergeants and a male second lieutenant identified themselves as gay and asked to be separated quickly from the service. Only one other person, an Airman First Class, has been discharged under the law since last October. In a statement issued by Alexander Nicholson, executive director of Servicemembers United, “[i]t is shocking to see incidents of people trying to force the Pentagon to let them out of the service obligation” because the law is still on the books.
While no plans for any Pentagon ceremonies or events regarding the repeal have been announced, the Servicemembers Legal Defense Network announced its nationwide “Don’t Ask, Don’t Tell” Repeal Day celebrations to take place when the law officially expires on Sept. 20.
“[T]he repeal of ’Don’t Ask, Don’t Tell’ is an important milestone along the journey to achieving LGBT equality in America’s military… through the events taking place across the country, we will pay tribute to their service and sacrifice as we look forward to this new era of military service-an era that honors the contributions of all qualified Americans who wish to serve,” said SLDN executive director Aubrey Sarvis.
A flagship event is scheduled in the nation’s capital, accompanied by supporter-created events throughout the country.
While the repeal is a “win” for the LGBT community as a whole, the damage done to military personnel forced to be closeted is irrevocable. With that said, after 17 years, all LGBT military personnel will re-enjoy the constitutional right of personal expression.