DOMA: Which road will the Supreme Court choose? 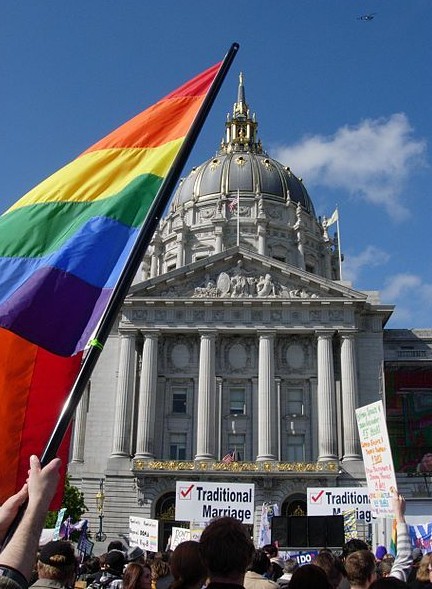 November 30 came and went. December 3 came and went. The U.S. Supreme Court’s next and final conference of the year to consider the pending Defense Against Marriage Act appeals will take place today, Dec. 7.
There have never been so many equality cases before the Supreme Court at one time — six total. While there are several cases with different fact patterns, they all involve two main disputes.
Five of the cases challenge the 1996 DOMA, which denies federal recognition of same-sex marriages. Federal appeals courts in Massachusetts and New York struck down the law this year, saying it impermissibly discriminated against LGBT individuals. The second dispute asks the Supreme Court to review California’s Proposition 8, passed by voters in 2008, which bans same-sex marriage in the state. The 9th Circuit Court of Appeals struck down Prop. 8 last February in a very narrow decision. In a 2-1 ruling, the appellate panel upheld a lower-court decision that Prop. 8 violated the constitutional equal-protection guarantee.
Now, there are three possible scenarios that could play out. In the first, the Supreme Court could decline to hear any of the marriage-equality cases. Perhaps the court feels that political momentum around the issue is too high on both sides and that deciding this through the courts at the moment could cause upheaval among Americans everywhere. If the justices go this route, the appellate court rulings in Masschusetts, New York and California upholding gay marriage will stand. But, because there isn’t a split amongst the circuits, there will be no national precedent to guide other parts of the country.
In the second scenario, the Supreme Court could decide to hear a DOMA case but take no action vis-à-vis Prop. 8. The legal issues in the two disputes are not entirely the same and the biggest difference is that the DOMA issue has a states’-rights component. Even those in favor of striking down DOMA hold that it is not Washington’s place to interfere with a state’s decision to recognize a certain kind of marriage, so a favorable result in this scenario will leave us with federal rights to Social Security survivor payments and tax exemptions but Pennsylvania’s DOMA (and the other 31 state bans) would still be in effect.
In the third scenario, the Supreme Court could take up both DOMA and Prop. 8. This would pave the way for a potential landmark ruling by June on gay marriage in its entirety. The odds of the justices going this route is slim because of the sweeping implications, but there is a chance they could choose this path and still avoid taking a stand on LGBT individuals’ constitutional right to marry.
Ultimately, I believe the Supreme Court will go with second scenario and hear a DOMA case, but not Prop. 8. As for which of the six cases, Windsor v. U.S. seems like the most cert-worth of all the marriage cases for three very compelling reasons.
Perhaps most notably, Windsor presents the most personal and heart-warming fact pattern. The case tells the discriminatory effects of DOMA on a lesbian couple who had been together for 42 years in a story that eventually became the basis for documentary “Edie and Thea.” In addition to the facts, Windsor is the only case of the 10 federal court rulings that invalidated DOMA where the justices applied “intermediate scrutiny” to the state’s sexual-orientation-based classification. In order to overcome the intermediate-scrutiny test, it must be shown that the law or policy being challenged furthers an important government interest in a way that is substantially related to that interest. If the Supreme Court takes Windsor under consideration, it will have to address the fact that the court heightened the level of scrutiny and agree whether or not LGBT individuals fall within a class that warrants intermediate scrutiny. Finally, the Supreme Court will likely take up the Windsor case because many believe that Justice Elena Kagan will likely recuse herself if the Supreme Court takes the 1st Circuit’s Gill v. OPM case because she had involvement in the case during her service as Solicitor General of the United States.
In 2013, several more states will be added to the list of those that recognize same-sex marriage. The states to watch include Rhode Island and Minnesota, where legislatures picked up numerous marriage-equality supporters. In Colorado, a legislator who blocked civil unions lost his re-election bid. In Illinois and Delaware, bills will be in effect for 2013. There’s a ballot measure in the works in Ohio and a lawsuit underway in Hawaii. Closer to home, depending on the outcome of a lawsuit in New Jersey, we may see marriage on the ballot or in the legislature, where it would need enough votes to override Gov. Chris Christie’s veto.
While we sit in this holding pattern waiting for the United States Supreme Court to decide if it will tackle this momentous issue, the prospect of a cert grant in Windsor offers hope that we will have much to look forward to in the coming year. Regardless, as we close out 2012, we would be remiss not to rejoice a year marked by unprecedented accomplishments advancing LGBT equality. We are on the right track and the train is only gaining speed!