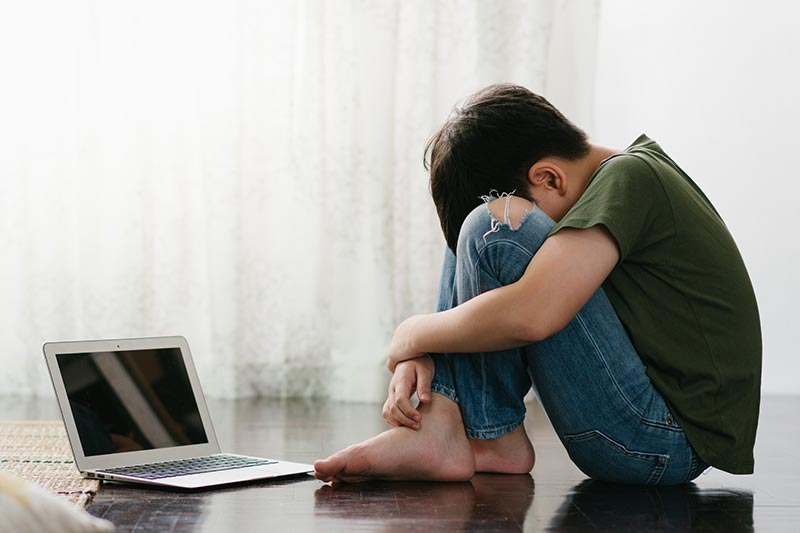 Bullying is defined as seeking to harm, intimidate or coerce (someone perceived as vulnerable).

Cyberbullying is the use of electronic communication to bully a person, typically by sending messages of an intimidating or threatening nature.

Defining what makes a bully seems easy enough but it is imperative, however, to realize that these definitions only touch the surface of an extremely complex and knotted web of perception and morals. Bullying, especially of LGBTQ youth, is responsible for countless suicides and is generally detrimental to the mental health of impacted youth.

Tragedy in the Wake of Bullying

In 2014, the world was shocked to hear the disturbing news that 17-year-old Michelle Carter coaxed her boyfriend, 18-year-old Conrad Roy, to commit suicide through a series of malicious text messages. She was convicted of homicide and was originally sentenced to 2.5 years in prison in 2017. Her sentence was reduced to 15 months plus five years of probation and just a few weeks ago, on Jan. 23, Carter was released early for good behavior.

On Sept. 23, 2019, suicide claimed another victim—this time not from just the technology of texts, but through an unceremonious outing of Channing Smith’s sexuality—as his sexually explicit texts with another boy were released through a host of social media platforms. The nature of outing and the fact that in the click of a button Smith’s entire school became aware of his sexuality caused him great humiliation. “I really hate how I can’t trust anyone because those I did were so fake,” Smith wrote shortly after. “Bye.” What followed was a fateful decision that would forever devastate his loved ones. “My brother committed suicide because of the actions of two kids that he trusted that turned personal screenshot messages over to social media in a deliberate attempt to assassinate his character,” his older brother, Joshua Smith, said in the days following the suicide.

The Smith family was unhappy with the handling of the case by the school. Little was revealed during the investigation, but in the end, there were no charges brought against any of the involved teens.

The laws on bullying vary state-to-state and the laws are completely dependent on the actions taken. If someone hurts another person physically then assault statutes may apply but not necessarily. Additionally, stalking laws are in effect in all states but that doesn’t necessarily include incessant texting or direct messaging via social media. Many states include explicit reference to electronic forms of bullying known as cyberbullying but don’t make the connection between the legal intent to harass. In every state except for Montana, schools mandate an “anti-bullying law” and have formal policies to help with the identification of what constitutes bullying behavior but there is no federal standard. There are also policies on when, where and how formal or informal disciplinary action is taken, but again, there is no federal standard.

Some laws require a school’s bullying policy to contain certain elements (such as defining bullying), where others do not include this specification. There are some states where the anti-bullying laws specify that schools may discipline students on their terms as long as the terms are appropriate and consistent and federal case law allows schools to discipline students for off-campus behavior, if the disruption to the learning environment is prominent.

Clearly problems arise in an area of law with this little specificity and lack of federal standards.

The human brain doesn’t fully develop until the average age of 25. From the onset of puberty, throughout teen years, and into mid-20s, the brain is taking in information and making decisions based on maturity. Rational choices can be more difficult for adolescents.

When a brain is not fully mature, the prefrontal cortex is not as functional as it will become by age 25. Because of this biological fact, we know that impulse control is more difficult for adolescents to successfully navigate. In simple English, it is easier for adults to maintain or resist peer pressure, control spontaneous impulses and be more “level-headed” than a teenager.

When a teenager’s brain is still developing, bullying affects cortisol levels and the body’s stress response system. Trauma stemming from chronic bullying can affect the structure of the brain, according to an international study conducted at King’s College in London. These findings mirror the research of changes in a brain’s architecture in a child who has experienced neglect or abuse by adult caregivers.

An international study conducted at King’s College shows that long-term changes to the structure and chemistry of the brain show the dire effects bullying creates. In these studies, the stress hormone, cortisol, is the substance that chemically alters brain development. Cortisol is released as part of the body’s stress response and is regulated by the hypothalamic-pituitary area in the brain. The hypothalamic area is an almond-sized region near the base of the brain, which helps regulate vital sensory data such as sleep, temperature, hunger, thirst, emotions and others. Higher levels of cortisol allow the body to operate at a higher performance when it is exposed to a stressful situation. Chronic stress (such as constant bullying) can have an opposite effect, which could allow the body and brain never fully to deactivate from a stressor response.

A Yale University study discovered that those who are bullied are between two and nine times more likely to consider suicide than nonvictims and that 10 to14-year-old girls may be at an even higher risk for suicide.

Recently, ABC News reported that 160,000 kids stay home from school daily because of a fear of bullying. Thirty percent of students in schools are either bully victims or bullies themselves.

Unlike in my era, in today’s social media, texting and instant-access technology world, there is nowhere to hide for an adolescent being bullied at school. In my day (and I’m only 39 and 358 days!), a kid could stay home from school, go to school and just skip and go to the movies or better yet, make friends with a teacher who let them stay in study hall all day. Today, without you even knowing it, your life can be displayed on a billboard for the entire school to see within nano seconds and bullies can reach you through multiple apps on your phone and through your computer.

This new reality of bullying is why the laws need to catch up with the impact of modern-day bullying and parents, educators and administrators need to all be vigilant to spot the signs of bullying and to not play it off as “kids will be kids.” The mental health of our younger generation is dependent on our defining this area of law and designing laws that will ensure bullies suffer real consequences for their actions.

If you are having thoughts of suicide, call the National Suicide Prevention Lifeline at 1-800-273-8255 (TALK). You can find a list of additional resources at SpeakingOfSuicide.com/resources.