LGBTQ Year in Review: Progress and Setbacks Round Out 2019 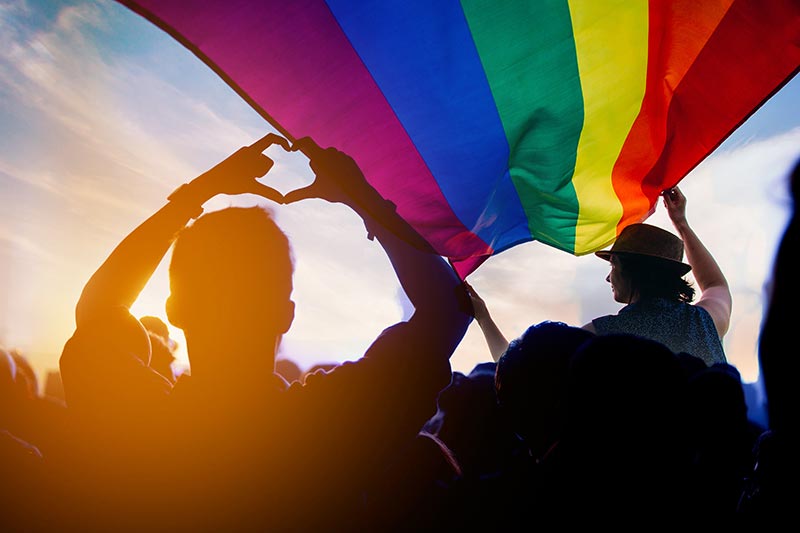 The fight for LGBTQ rights has been tougher than ever in 2019 and support for our community is stronger than it has ever been. Just as with any significant, important movement, there are highs as well as lows. Last year was ripe with celebrations of victory, but we also encountered setbacks and faced opposition with the current administration. This article highlights LGBTQ community has encountered in 2019.

New Jersey became the second state in the United States to require public schools to teach LGBTQ and disability-inclusive material.

On Feb. 1, 2019, New Jersey passed a law that will require all public schools to teach material that is inclusive of LGBTQ history. The material will be incorporated into middle and high school curricula starting in the 2020-2021 school year. Private schools do not have to comply as they are not state regulated.

“The governor believes that ensuring students learn about diverse histories will help build more tolerant communities and strengthen educational outcomes,” the governor’s office said in a statement. Prior to New Jersey, California was the only state that had such a law. In May, Colorado followed suit in passing a similar law and other states are now continuing in the paths of California, New Jersey and Colorado.

New York banned the use of gay and trans panic legal defense strategies.

On June 30, 2019, New York became the sixth state to ban a defense tactic allowing a defendant to blame a violent act on the fact that they were highly distraught about the victim’s sexual orientation or gender identity. Upon signing the bill into law, Gov. Andrew Cuomo stated, “New York has always been the home of the LGBTQ equality movement, always. It all started here. It started at Stonewall. It started when we hosted the first Pride Day ever. And we’ve kept that legacy alive.” The only other states that currently ban gay and trans panic defense strategies are California, Rhode Island, Illinois, Nevada and Connecticut.

On July 26, 2019, Gov. J.B. Pritzker signed a bill into law requiring all single-occupancy bathrooms to be labeled as gender neutral. Sen. Melinda Bus, who sponsored the legislation, told the Chicago Tribune that, “making single-occupancy restrooms gender neutral is inclusive, but it also just makes sense. It’s a small change that will make a big impact for thousands of Illinoisans.”

The law passed unanimously in the state senate and with a vote of an overwhelming 109-5 in the state house. The law took effect on Jan. 1, 2020.

On July 31, 2019, the Pennsylvania Department of Transportation (PennDOT) announced that Pennsylvanians will no longer have to check male or female when filling out their driver’s license or state ID card application. The change takes effect in October 2020. Some opponents of the change fear that this will affect compliance with the RealID program, however, many airlines are now beginning to allow nonbinary options for passengers. Gov. Tom Wolf fully supports this move, stating that it falls in line with his opinions regarding equity and fairness. Many motorists identifying as trans nonbinary feel that the change is long overdue.

On Sept. 22, 2019, Billy Porter won the highly coveted Emmy award for his work on the FX drama “Pose.” The pioneering show is in its second season and features a highly diverse LGBTQ cast—as well as more transgender-scripted regular actors than on any other show in television history. The show is set in 1990 and portrays the HIV/AIDS epidemic as well as discrimination, poverty and pervasive harassment of the LGBTQ community. Porter included a strong message for acceptance in his speech, “we are the people. We, as artists, are the people that get to change the molecular structure of the hearts and minds of the people who live on this planet. Please don’t ever stop doing that. Please don’t ever stop telling the truth.”

Transgender murders are increasing and spreading fear in the community.

As of November 2019, there were at least 22 transgender murders in the United States. Mind you, there is no definitive way to confirm the actual number of murders of transgender and gender nonbinary people because all crime-related information is voluntarily provided to the government from state and local authorities and there is no federal source that reports on the deaths or crimes against the transgender community. In addition, the numbers are likely even higher because victims are often misgendered and therefore not reported as a murder or act of violence against a transgender person.

The victims are disproportionately African American women under the age of 30 from the South. Florida and Texas are currently tied for the states with the most fatalities.

And this is not new. Sadly, every year-in-review column that I write has a paragraph dedicated to the murders and violence against transgender individuals. Since 2013, there have been at least 157 transgender fatalities due to violent crime in our country and of these fatalities, at least 70% have been black transgender women. Disturbingly, approximately half of all victims are killed by someone close to them, such as a family member, friend or intimate partner.

The Trump Administration has continued to anchor in and set the LGBTQ community’s fight for equality and fairness back.

Jan. 23: The Department of Health and Human Services (HHS) granted an exemption to adoption and foster care agencies in South Carolina to allow religiously affiliated services to discriminate against current and aspiring LGBTQ caregivers.

April 19: HHS announced a proposed rule to abandon the collection of data pertaining to the sexual orientation of youth in the foster care system as well as foster and adoptive parents.

May 2: HHS ruled that hospital officials, staff and insurance companies can and should deny care to patients, including transgender patients, based on their religious or moral beliefs. This ruling was immediately challenged in court.

May 14: President Donald Trump announced that he opposes the Equality Act (H.R. 5). This act is federal legislation that would strengthen our nation’s current civil rights protections for LGBTQ citizens.

May 22: The Department of Housing and Urban Development (HUD) announced that they plan to abolish regulations prohibiting discrimination against transgender people in HUD-funded homeless shelters.

July 3: HUD removed the requirements that applicants for homelessness funding maintain anti-discrimination policies and demonstrate efforts to serve LGBTQ people and their families, who are more likely to be homeless.

Aug. 14: The Department of Labor (DOL) announced that it is proposing a rule to expand the ability of federal contractors to exempt themselves from equal employment opportunity requirements by allowing for-profit and nonprofit employers to impose “religious criteria” on employees that could include barring LGBTQ employees.

Aug. 16: The Department of Justice (DOJ) filed a brief in the U.S. Supreme Court that argues that federal law “does not prohibit discrimination against transgender persons based on their transgender status.”

Nov. 1: HHS announced that it would not enforce, and plans to repeal, regulations prohibiting discrimination based on gender identity, sexual orientation and religion in all HHS grant programs. Targeted, are programs that address the HIV, opioid and youth homelessness epidemics.

From Billy Porter’s pioneering energy in Hollywood to teaching LGBTQ history in schools to gender neutral bathrooms to … Trump—it has been quite a year! We have a lot of work to do to protect the LGBTQ community in the workplace, schools, housing and abroad but I believe that this new decade will bring opportunities to cease the blatant disregard for equality we’ve been enduring. The groundwork has been laid and now it’s time to drive the movement forward in 2020!