NJ Marriage and What It Means For You

Beth Asaro and Joanne Schailey made history this morning, October 21, 2013, becoming the first same sex couple in the state of New Jersey to be legally married. Asaro and Schailey were married shortly after midnight on a day that Garden State Equality executive director, Troy Stevenson called “the day that New Jerseyans have been waiting for for decades.” Asaro and Schailey were also the first same sex couple to be joined in a civil union in New Jersey back in 2007. 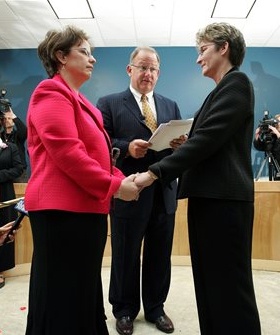 So what does this mean for same-sex couples in New Jersey?

For same-sex couples looking to get married, there is a mandatory 72 hour waiting period after submitting an application for a marriage license. The couple should complete the application and sign it under oath before a Registrar and a witness. The waiting period can be waived by the Superior Court if the couple presents satisfactory proof that an emergency exists.

While the landmark decision impacts marriages, it does not affect existing civil unions from New Jersey. For same-sex couples with civil unions in New Jersey, the court’s decision does not automatically convert civil unions into legal marriage. The couple can choose to get married and dissolve the civil union or get married and keep the civil union intact. In the event that the couple separates, the couple would have to obtain both a divorce and dissolution of their civil union. If you are a PA resident with a NJ civil union, it is unaffected and still cannot be dissolved. Couples concerned about any of the legal issues involved can consult an attorney at the Giampolo Law Group and PhillyGayLawyer.com: https://giampololaw.com/