What the DOMA ruling means for Pennsylvania.

Angela D. Giampolo, interviewed by Josh Robert of the Philadelphia Business Journal
Angela Giampolo will always remember where she was on June 26, 2013.
That’s when she, and the rest of the country, first heard that the Defense of Marriage Act was repealed by the U.S. Supreme Court.
“It’s one of those moments I’ll remember 17 years from now,” said Giampolo, an attorney who also runs a blog at PhillyGayLawyer.com.
“Now 97 million people live in a jurisdiction where gay marriage is legal. This is no longer a movement. It’s happening”
But while it’s certainly a landmark decision for gay rights, the repeal of DOMA will not have much of a huge impact in Pennsylvania because gay marriage is still not legal in the state.
The largest impact it will have is on immigration. Now, if a same-sex couple – with one person being foreign born – gets married in a states where gay marriage is legal, they can move to Pennsylvania and the foreign born person can apply for federal immigration benefits like residency and citizenship.
Giampolo told the story of a friend who was forced to move to Paris with his French-born partner because their marriage wasn’t recognized in Pennsylvania, meaning he couldn’t get the same benefits as a heterosexual couple.
“Moving to Paris is not as glamorous when you can’t get a job and don’t speak the language,” she said.
In the 13 states where gay marriage is legal, those married couples should all start seeing all the same federal rights and benefits as heterosexuals.
In the rest of the country, “it’s going to be a fight in every single state,” she said.
“There are 1,138 federal rights bestowed upon people who are married but 90 percent to 95 percent are not recognized for same-sex couples,” said Giampolo.
She expects that attorneys will find plaintiffs similar to the New York case that brought down DOMA and bring those cases to the courts.
“It’s going to be a litigation brawl,” she said. “Now we have precedents.” 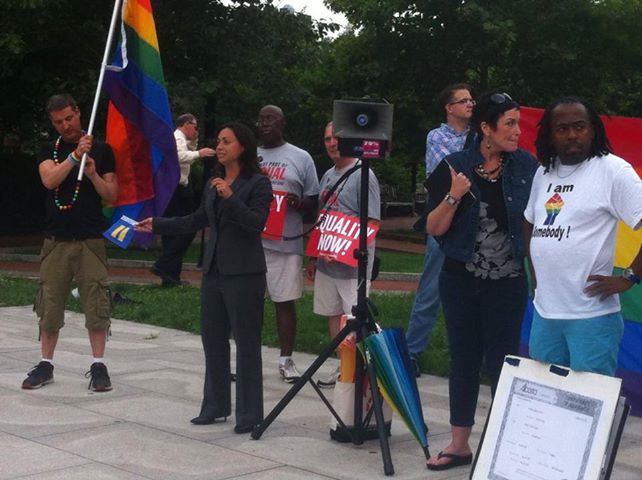 PhillyGayLawyer, Angela D. Giampolo speaks to the crowd at the DOMA rally in front of the liberty bell on the day of the SCOTUS decision.