PhillyGayLawyer in Legal Intelligencer: Reflecting on Victories and Losses for LGBT Rights in 2013 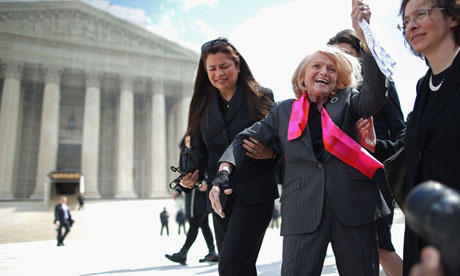 Will 2014 be the year when opponents of progress will finally stand alone on the wrong side of history? The forecast looks cloudy, at best. But as I look back at 2013—the battles we’ve won and the battles we’ve lost—I see tremendous potential for advances in LGBT equality in the New Year.
It is always difficult to quantify progress in struggles for increased basic human rights. Looking at 2013 cumulatively, though, there is no doubt that the United States is picking up momentum and moving toward LGBT equality faster than ever.
The most impactful and momentous achievement this year is by far the nullification of Section 3 of the Defense Against Marriage Act (DOMA). In a 5-4 U.S. Supreme Court decision, Justice Anthony Kennedy wrote for the majority, concluding that the purpose of DOMA was to “impose a disadvantage, separate status, and so a stigma upon all who enter into same-sex marriages made lawful by … the states.” In time, United States v. Windsor, 133 S. Ct. 2675 (2013), worked to extend federal benefits to all married same-sex couples. The Supreme Court also ruled on the appeal in the case Hollingsworth v. Perry, No. 12–144, stating that proponents of initiatives like California’s Proposition 8 (defining marriage as between a man and a woman) did not possess legal standing to be heard by the U.S. Supreme Court, leaving the district court’s 2010 ruling intact and allowing the distribution of marriage licenses to same-sex couples to resume.
The U.S. Senate approved the Employment Non-Discrimination Act (ENDA) with strong bipartisan support. Seven Republican Senators voted for ENDA’s passage, shoring up the Democratic majority. ENDA ensures workplace protections to LGBT individuals and is supported by numerous successful American companies. Pending passage in the House, ENDA would be the largest federal endorsement of LGBT equality since Windsor.
We had a record number of states legalize gay marriage (or as I like to call it, marriage). Eight states joined the list, bringing the total number to 17 (18, if the Supreme Court releases the hold on Utah). On an international level, many countries passed legislation to allow same-sex marriage. France, England, Wales, New Zealand, Uruguay, Brazil and Colombia all passed same-sex marriage provisions. Unlike their kiwi neighbors, Australia’s High Court overturned same-sex marriage provisions, ruling that Australia’s Marriage Equality Act conflicted with the 1961 Federal Marriage Act.
California and New Jersey made the news for passing the first statewide bans on conversion therapy. Conversion therapy is aimed at “changing” a person’s sexual orientation by extreme therapeutic methods (e.g., electroshock, shaming, physical abuse). Vulnerable populations of young adults have long been subjected by their families to such treatment in an attempt to change an immutable characteristic through questionable and harmful methods. These conversion bans protect young adults from abuse and unsubstantiated treatments. To put it in perspective, Ecuador allows conversion therapy at more than 200 facilities. Treatments include electroshock and “raping someone straight,” whereby lesbians are raped in an attempt to convert them to straight women.
Often overlooked, the transgender community has had several significant victories in 2013. Germany became the first European country to offer a third gender option on birth certificates. Back in the United States, Delaware and Philadelphia both passed legislation to expand equal rights protection to transgender individuals and California also passed legislation to protect transgender teens by requiring equal access to public school bathrooms and locker rooms.
On his way home from a trip to Rio de Janeiro, Pope Francis commented, “If someone is gay and seeks the Lord with good will, who am I to judge?” The pope is bound to a doctrine that condemns LGBT relationships. However, Francis’ words may indicate a new era of tolerance in oppressive countries like Brazil, where roughly one gay person was murdered every 26 hours in 2013.
On a negative note, Puerto Rico’s Supreme Court succumbed to 200,000 antigay demonstrators, and banned same-sex adoption in February 2013. India and Russia were even worse. The Indian Supreme Court held that same-sex relationships should be criminalized in December; this ruling overturned a 2009 decision that such criminalization was unconstitutional. Russia’s attacks on the LGBT community made headlines globally, in light of the coming 2014 Sochi Olympic Games. The Russian legislation, championed by President Vladimir Putin, criminalizes all conduct supporting, encouraging, or positively portraying LGBT orientation. The law does not criminalize “being gay,” as much as it punishes public endorsement of being gay. The law calls such support “propaganda” and imposes fines and even jail time on lawbreakers. LGBT-pride celebrations have been canceled and attacks on LGBT individuals have skyrocketed.
Uganda passed a law criminalizing same-sex relationships with life in prison. LGBT individuals can be extradited to Uganda for punishment back in Uganda. Uganda’s former bill imposed the death penalty on LGBT individuals, gaining the nickname the “Kill the Gays” bill. Such laws are reminiscent of pre-war Germany that allowed a government to execute “undesirable” minorities, and it is important to remember how indifference on an international or local level can lead to catastrophe for a group of people.
It’s apparent that there is still much work to be done. While we take a moment to breathe and savor the many victories, we cannot become complacent. Right now, at the beginning of 2014, LGBT advocates are gearing up for this year’s significant upcoming battles. In a year of midterm elections, Americans will have the opportunity to decide for themselves who they want making laws and representing them. I sincerely hope that they choose wisely and that the LGBT community’s existing advocates will be joined by many others so that 2014 will be a year not just to celebrate, but one for the history books.
Read more: http://www.thelegalintelligencer.com/id=1202637832737/Reflecting-on-Victories-and-Losses-for-LGBT-Rights-in-2013#ixzz2qISYrvLm