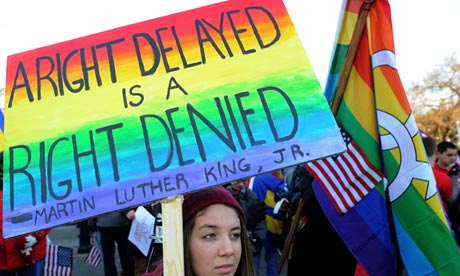 All eyes are on the Supreme Court again this week as it nears time to rule on Section 3 of the federal Defense of Marriage Act (DOMA) and California’s Proposition 8. And the Supreme Court Justices are certainly taking their time; the cases prompting these decisions were already examined in early April, but they deferred a final ruling until late June. Decisions will either be rendered on both cases by Thursday, or sometime after the Court’s annual summer hiatus. And the opinion of those nine Justices will determine whether or not millions of LGBT individuals are able to exercise their right to marry their partners.
DOMA, a federal law that defines marriage as a union between one man and one woman, was signed by then-President Bill Clinton in September of 1996. Meeting little opposition at the time, he signed into law the government’s ability to deny over 1,138 federal rights to the LGBT community. He has since admitted his mistake, but his error will not fully be amended until the Supreme Court rules to repeal the legislation altogether.
The Supreme Court’s decision on DOMA will boil down to three possible outcomes:
It could strike down DOMA as a violation of equal protection. This would deem a gay marriage ban as a denial of a constitutional right to one group of people that is protected by the Equal Protection Clause of the Fourteenth Amendment, and would result in all states having to legally recognize same-sex marriages.

It will likely strike down DOMA based on the principles of federalism. The Court will probably chose to strike down the act at the federal level, but will still adhere to federalist ideology that most decisions should be left for the states to decide. So, the government will have to recognize the same-sex marriages that come from states that permit it, but will not require that all states do so.
Proposition 8 is a ballot initiative passed in California in November of 2008 that denies the right to marry to same-sex couples, because “only marriage between a man and a woman is valid or recognized in California.” It has since been challenged by two particular gay couples, spearheaded by the case Hollingsworth v. Perry, which prompted the Ninth Circuit Court of Appeals to deem Prop8 unconstitutional.
Prop8 could yield one of several different SCOTUS decisions, three of which are founded on equal protection arguments.
For one, the Court could rule that Prop8 is constitutional. Then, the law will stay as is, and will not change unless defeated by Californians at the ballot box.
Like DOMA, the case could, and may be, dismissed on standing grounds. The previous court’s opinion would stand, but this would leave the decision vulnerable to being overturned in several California jurisdictions. The momentum bringing Prop8 to the Supreme Court was driven by the suits of two gay California couples, so local clerks – if they do not want to marry a gay couple – could argue that the decision does not apply to their county or town.
Or, the Supreme Court could strike down Prop8 for one of three different equal protection grounds. Either because: 1) denying same-sex, but not opposite-sex, couples the right to marry is unconstitutional, 2) giving same-sex couples the same marriage rights without allowing them to use the term “marriage” is unconstitutional, or 3) it is unconstitutional to take away a right that had previously been granted to a group of people.

The two most likely outcomes would be a dismissal of Prop8 on standing grounds, or striking it down on equal protection grounds, holding that it is unconstitutional to remove a right previously conferred upon a people. These decisions, however, would only be applicable to California. And the judges’ opinion on the Prop8 cases might be less predictable than their decision on DOMA.
Four of the justices will almost certainly vote in favor of upholding DOMA, while four others will just as likely vote in favor of its repeal. The swing vote is Justice Kennedy, and though he has long been an advocate for gay rights, he is also a proponent of states’ rights.  Marriage has traditionally been an issue reserved for the states, so odds are that he will find a governmental ban on same-sex marriage unconstitutional, but will be reluctant to tell states that they must allow it.
The federalist decision also seems most likely due to international pressure to consider gay marriage. As of May, 13 countries recognized same-sex marriage at the national level, and by August, Uruguay and New Zealand will have joined their ranks. The United States, which has long boasted a reputation as a “melting pot” – a country that accepts and celebrates people of all kinds, without prejudice – could no longer do so if it continues to systematically discriminate against the LGBT community.
So where does Pennsylvania fall in the midst of all of these arguments and legal jargon? In short, Pennsylvania will remain largely unaffected. If the Supreme Court decides that DOMA is unconstitutional, but individual states still have the right to determine their own marriage policies, then in the immediate future Pennsylvania will still be subject to a same-sex marriage ban.
This is not to say, however, that the repeal of DOMA would serve no purpose to Pennsylvanians. Striking it down would be a clear sign that popular sentiment towards gay equality is shifting at all levels in favor of the LGBT community.  The repeal of DOMA would not mean that only gay couples in states with marriage equality would benefit, or that Pennsylvania couples stand to gain nothing; it would simply mean that it is Pennsylvania’s turn to step up in the name of equality.  If the Supreme Court does its part in the next week, then Pennsylvania legislators will have to do theirs to ensure marriage equality for the state at all levels.
The emergence of marriage equality as a prominent issue in the Supreme Court is proof that LGBT equality has gained federal attention, and that it is finally being taken seriously. The Justices’ opinion will spark celebration and opposition regardless of their ruling, and there is a good chance of a positive outcome for the LGBT community.