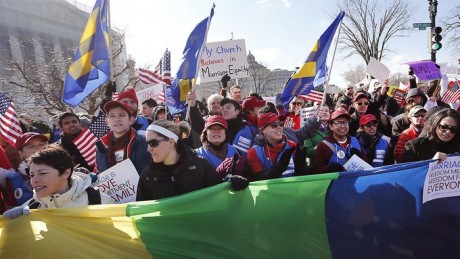 The Supreme Court of the United States held hearings March 26 and 27 on the  constitutionality of California’s Proposition 8 and Section 3 of the federal  Defense of Marriage Act. The proceedings yielded few surprises and few  definitive outcomes.
The repeal of Section 3 of DOMA would be a landmark  SCOTUS decision and would afford gay couples in states with marriage equality  many of the federal rights they have previously been denied. It would help  narrow the discrepancies between LGBT rights at the state and federal levels  and, over time, simplify the grueling processes we endure when completing banal  tasks straight couples take for granted, such as filing taxes and attaining  employee benefits.
Though striking down Section 3 of DOMA would be an  extraordinarily positive reflection of the growing support for LGBT rights in  the United States, its repeal would ultimately have little effect on  Pennsylvania law; repeal would not automatically mean that we will see marriage  equality in all 50 states. The court will likely repeal the act but still permit  states to ban gay marriage on an individual level, which leaves Pennsylvania  free to continue to legally discriminate against LGBT couples and  individuals.
The court also heard arguments on whether Prop. 8, a  California ballot proposition passed in November 2008 that defined marriage as  between one man and one woman, is constitutional. In August 2010, Hollingsworth  v. Perry went before a federal court that ultimately found Prop. 8 to be  unconstitutional, a ruling upheld by the Ninth Circuit Court of  Appeals.
The arguments for Prop. 8, spearheaded by attorney Charles  Cooper, rested primarily on an antiquated and naïve notion of “responsible  procreation.” Cooper questioned same-sex couples’ ability to and method of  conceiving and raising children, which may differ from opposite-sex couples.  Justice Alito further added to this enlightened reasoning by asserting that gay  marriage is simply a social experiment from the Netherlands that came about in  2000 and that it requires more research before determining whether or not it is  beneficial. (Because we in today’s world know that all straight couples keep  sex, marriage and family clean and sacred.) And when Justice Kagan asked Cooper,  “If you are over the age of 55, you don’t help us serve the government’s  interest in regulating procreation through marriage … So why is that  different?” he had no response.
Based on the Prop. 8 hearing, SCOTUS will  likely decide that it cannot yet make a determination. While each justice’s  stance on LGBT equality — whether favorable or unfavorable — is generally known,  the panel is likely to rule that it is too soon for the court to tend to this  matter. The court can declare that the case has no standing because the Prop. 8  ballot petitioners are not the proper parties to defend the measure. Moreover,  it could rule that marriage is a state issue, and California has spoken. Either  outcome likely leaves California with marriage equality come June.
Seven  different courts have now found DOMA to be unconstitutional, and SCOTUS is now  considering that question with U.S. v. Windsor. In 2009, Thea Spyer, the wife  and 40-year-long partner of LGBT activist Edith Windsor, died. Though couples in  “traditional” marriages can obtain their spouses’ inheritance tax-free, Windsor  was forced to pay estate taxes totaling more than $363,000.
Harvard Law  professor Vicki Jackson was appointed to argue that the Supreme Court did not  have jurisdiction over the case at all. Under President Obama’s administration,  the government will no longer defend DOMA. In a case of first impression  involving the federal government, both the plaintiff and the government were in  agreement that DOMA is unconstitutional, leaving the justices perplexed as to  why the case was even before it. And, similar to the Prop. 8 case, it is clear  that several justices are concerned if they have the authority to render a  decision on a matter that has traditionally been a state issue. Taking the case  could, as swing vote Justice Kennedy said, question “whether the federal  government has the authority to regulate marriages.”
If the court decides  not to dismiss the case on “standing” grounds, as with Prop. 8, then it may also  assert that the federal government overstepped its bounds by meddling in an  issue that states have historically decided.
It is likely that the LGBT  community will get two “wins” from these cases: By June, California will likely  have marriage equality, and Section 3 of DOMA will be struck down. But, both of  these victories may come without the Supreme Court definitively stating that  marriage is a fundamental right to all Americans, gay or straight. It would be a  large win on the national level, but without considerable long-term advocacy,  there will be little change in Pennsylvania.
Read more:  PGN-The Philadelphia Gay News. Phila gay news. philly news – Supreme Court hears Prop 8 DOMA arguments