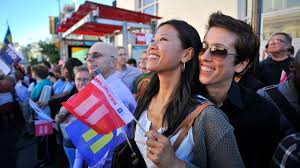 June 26 will be a day we all celebrate for  years to come. On the anniversary of the Lawrence v. Texas case, which struck  down state anti-sodomy laws as unconstitutional, the Supreme Court of the United  States ruled to strike down Section 3 of the federal Defense of Marriage Act and  California’s Proposition 8 was vacated, giving same-sex California couples the  right to marry (again!).
The majority decision indicated that DOMA is  unconstitutional because it violates the Fifth Amendment and the 14th  Amendment’s equal-protection clause.
“While the Fifth Amendment itself  withdraws from government the power to degrade or demean in the way this law  does, the equal-protection guarantee of the 14th Amendment makes that  Fifth-Amendment right all the more specific and all the better understood and  preserved,” wrote Justice Kennedy in his opinion.
Striking down DOMA  based on equal-protection grounds is key because it identifies the LGBT  community as a group deliberately picked out and stigmatized, and acknowledges  that it has been done for no particular reason or in the name of no particular  state interest. This will open the door for plaintiffs nationwide seeking to sue  within their home states seeking the same equal protections. Kennedy mentioned  that “the avowed purpose and practical effect of the law here in question are to  impose a disadvantage, a separate status and so a stigma upon all who enter into  same-sex marriages made lawful by the unquestioned authority of the state,” and  it would be easy to make the same argument for marriage bans implemented at the  state level.
So, what does DOMA being repealed mean for people around the  country and for people right here in Pennsylvania?
Same-sex couples who  are legally married, and live in a state that recognizes marriage equality, will  have access to all of the 1,138 federal rights bestowed upon married  people.
However, for the rest of us, it will be tricky.
There is  no uniformity among federal agencies regarding the definition of marriage for  the purposes of bestowing federal benefits. Some federal agencies adhere to what  is known as a “place of celebration” standard. That means, no matter where a  couple is legally married anywhere in the world, the union is recognized for the  purposes of federal benefits. But other agencies, including the Internal Revenue  Service and the Social Security Administration, adhere to a “place of residence”  standard. To illustrate how uncoordinated the federal agencies are, the  Department of Defense has a “place of celebration” marriage standard for  active-duty military but the Department of Veterans Affairs has a “place of  residence” standard.
In sum, Pennsylvanians who were married in a state  that recognizes marriage equality will see little impact. They will not have  access to the major federal benefits such as Social Security and estate-tax  exemption. However, the largest impact DOMA’s repeal will have on Pennsylvanians  (and the other states without marriage equality) will be in connection with  immigration. Once the repeal is effective, if a same-sex couple — with one  person being a foreign national — gets married in any state where same-sex  marriage is legal, the foreign national can apply for federal immigration  benefits, like residency and citizenship, despite being a Pennsylvania  resident.
So what now? We bring the fight home to the Commonwealth of  Pennsylvania — and it has already started. State Rep. Brian Sims (D-182nd Dist.)  and State Rep. Stephen McCarter (D-154th Dist.) plan to formally introduce a  bill in August that would extend marriage rights to same-sex couples in  Pennsylvania.
“This legislation would re-define the definition of  marriage as a civil contract between two people who enter into matrimony and  eliminate the current prohibition against same-sex marriage in our  commonwealth,” reads a memo that Sims and McCarter drafted. State Sen. Daylin  Leach (D-17th Dist.) introduced a same-sex marriage bill in the Pennsylvania  Senate last month and, in April, state Rep. Mark Cohen (D-202nd Dist.) put forth  a measure that would allow LGBT couples to enter into civil unions in the  commonwealth.
Full equality in Pennsylvania is just around the corner and  we have the strength we need to go the extra mile. After 17 years, the voices of  the millions of LGBT individuals that Congress pushed aside could not be  silenced; we prevailed. Section 3 of DOMA has been struck down, and our  victories with DOMA and Prop. 8 have sparked even greater momentum to continue  our efforts for equality.
Angela D. Giampolo, principal of Giampolo  Law Group, maintains offices in Pennsylvania and New Jersey and specializes in  LGBT law, business law, real-estate law and civil rights. Her website is www.giampololaw.com and  she maintains two blogs, www.phillygaylawyer.com and www.lifeinhouse.com. Send Angela your legal questions at [email protected].