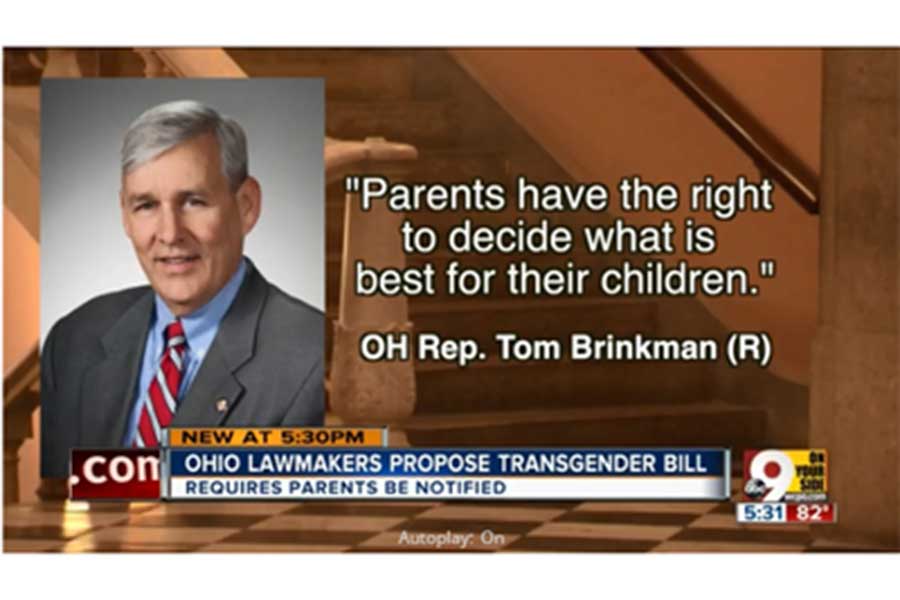 Ohio’s House of Representatives is considering legislation that forces educators, therapists and social workers to out transgender minors to their parents or face fourth-degree felony charges. For those who display characteristics in opposition to their assigned gender at birth, or who openly question their gender, the stakes are nothing short of life and death.

Ohio House Bill 658 mandates certain state workers and therapists to report a minor’s gender identity or the questioning of their gender identity to the parents. Introduced by Reps. Thomas Brinkman and Paul Zeltwanger, the bill also gives parents the right to “withhold consent for gender-dysphoria treatment or activities that are designed and intended to form a child’s conception of sex and gender.”

Ohio legislators want the decision to transition out of the hands of transgender people if they are under 18, giving sole power of treatment decisions to the parents who must both consent. For teens with parents unwilling to support them at a time when the effects of gender dysphoria lead to a host of mental anguish and suicidal thoughts, this could be a death sentence.

In a statement, Equality Ohio said that “in targeting transgender children, the bill’s authors create ridiculous and unenforceable requirements — requirements that out transgender students and create a significant threat of bullying and reduced access to social-support systems. This unnecessary and discriminatory bill does nothing to support youth and families. In fact, it puts the livelihoods of some of our most vulnerable youth — transgender youth — further at risk with bullying and discrimination by potentially forcing teachers to out them.”

Not only is the bill particularly odious in its intended purpose to out transgender teens, it also requires the withholding of treatment without the “written, informed consent of each of the child’s parents and the child’s guardian or custodian, as required in section 2131.144 of the Revised Code.” Simply put, if one parent is aware and agrees to the child’s treatment for gender dysphoria but the other parent isn’t aware or their whereabouts are unknown, the teen will not be able to seek treatment for gender dysphoria.

The measure also protects parents or guardians by forbidding those who reject treatment options for their transgender child from having their decision used against them in custody cases or complaints of abuse and neglect.

According to data from the National Center for Transgender Equality, nearly 37 percent of transgender people attempt suicide before the age of 24. The Human Rights Campaign said in its 2018 LGBTQ Youth Report that because LGBTQ youth spend the majority of their time in school, their experiences in classrooms, halls, lunchrooms and extracurricular activities shape who they are. For transgender students, sometimes their teachers or therapists are the only people with whom they’re comfortable exploring their gender identity. Forcing those adults to choose between being charged with a felony or betraying the trans students’ trust is no choice at all.

Leelah Alcorn, a transgender girl born and raised in Ohio, became one of the most internationally recognized transgender youth when she posted a suicide note on her Tumblr site before her death in 2014. She expressed hope that her suicide would result in a dialogue about discrimination, abuse and lack of support for transgender people. When she came out to her parents at age 14, they refused to accept her gender identity, insisting she remain the boy she was born as. At 16, when she requested to transition as a treatment for her gender dysphoria, her parents not only denied treatment, but they sent her to Christian-based conversion therapy in an attempt to force her to accept her gender assigned at birth. Unable to connect with friends thanks to her parents removing her from school and shutting down her access to social media, Leelah blamed them for isolating her and exacerbating her feelings of alienation, directly correlating her parents’ lack of support with her decision to end her life.

If HB 658 passes and eventually becomes law, transgender teens will have nowhere left to turn for help. A significant portion of insurers won’t pay for medical treatment without a diagnosis of gender dysphoria. For many transgender teens, receiving hormone blockers at the onset of puberty and hormone replacement therapy to put them on the path toward aligning their physical body with their mental identity are life-saving treatments, improving their mental health and stability.

If teachers, guidance counselors, therapists and social workers are unable to help them without mandatory disclosure, there’s a very real possibility these teens will turn to much less healthy options to cope, or decide to end their pain all together.